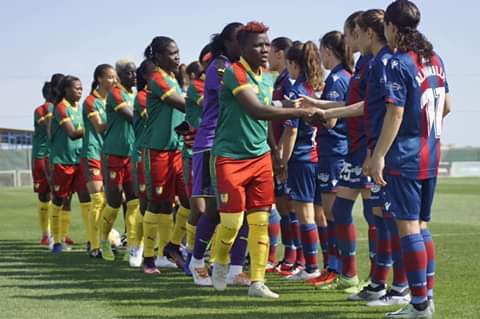 Madrid (National Times)-The Women’s National football team of Cameroon has registered an 8-0 victory against local Spanish club Murcia as it gathers moment ahead of the Women’s World Cup billed for France in June.

Abam Michaela scored the game’s opening goal for Cameroon. She who recorded a hat trick during the encounter. Ajara Nchout, Raissa Feudjio, Ninon Abena, Marlyse Ngo Ndoumbouck and Akaba Michelle scored the rest of the goals.

The lionesses had played two test matches already in Spain before the clash against Murcia. In the first preparatory game, the lionesses suffered a humiliating 4 to 0 defeat in the hands of the Spanish national team.

Coach Alain Djeumfa and his team bounced back  with a 4-0 victory over Levante, another local side in Spain. The lionesses have one last test game against Alahama  before their departure for France.  The tournament starts on June 7.