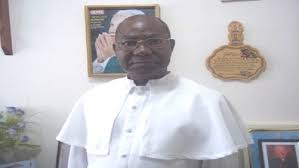 Bamenda (National Times)-Archbishop Cornelius Fontem Esua of the Catholic Diocese of Bamenda in Cameroon’s restive North West Region has revealed details  of the night he spent in the captivity of gunmen suspected to the elements of the separatists Ambazonia movement.

Esua opened up on his experiences Wednesday June 26th shortly after driving into Bamenda. He was abducted earlier on Tuesday. He spent 12 hours in the bush with the boys.

The Prelate told reporters that he was not rough handled by his abductors but treated with respect. “I stayed a night with them, they were good, they were very gentle,” Esua said.

Discussion with the ‘General’

He said the boys who took him hostage said they were acting on the instructions of the “General” whom he spoke to on the phone. “I told the ‘General’ that, ‘look I am not going to stay here, if I stay here it’s to the detriment of your course,’” the Man of God sounded.

The Archbishop said he was not however let free that night as his abductors told him it was unsafe for him to go to Bamenda. “He (General) said they have blocked the road…it’s only possible tomorrow,” Mgr Esua stated, adding that “and indeed if I went that night I may not have arrived Bamenda because there were huge heaps of stones on the road, that is the reality of it.”

After spending the night in the company of the Amba Boys, Mgr Esua said the following morning the ‘General’ who had promised to come did not show up because of security reasons – “Rather a ‘Commandant’ came and talked with me…that I’ll go back home as the soon as possible.”

According to Mgr Esua, the suspected Amba Boys held him in captivity because he supposedly disobeyed their rules which were a security threat to their operations around the Belo area where he was reportedly taken.

He said the boys who took him captive informed him they were acting on the instructions of ‘General’. The Prelate said it was in the course of his discussion with the hierarchy of the suspected Amba Boys that he was informed that he disobeyed and went through roadblocks which were mounted for a purpose.

Realizing that he was on the wrong side of the argument, the Bishop, in all humility quickly tendered his apology to the ‘General’ and ‘Commandant’. “I told him if I have disobeyed you, am sorry,” MgrEsua said.

Worth noting that Mgr Cornelius Fontem Esua was abducted, alongside his driver on Tuesday while returning from Esu in the Menchum division. He was only released after spending the night in the bush with his abductors. The Man of God said no harm was done to him and sounded save and sound.