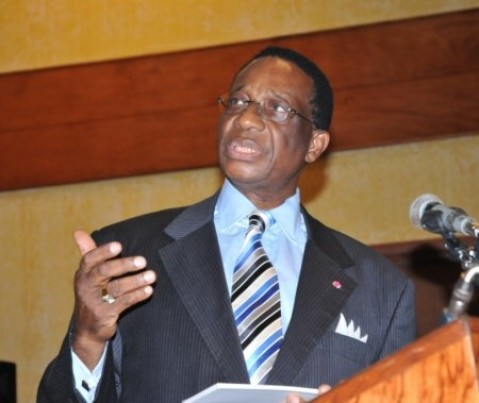 Belinga Eboutou Dies After 15 Months Out Of The Presidency

Yaounde (National Times)-The death has been announced of Cameroon’s celebrated career Diplomat and long time Biya aide  Martin Belinga Eboutou. A release from the Director of the Civil Cabinet at the presidency of the republic  Samuel Mvondo Ayolo indicate that, Eboutou died at a health facility in Geneva Switzerland at 1:30 PM  Wednesday May 8th.

Eboutou’s demise comes 15 months and a few  days  after he was dropped from the government on March 2nd , 2018. The deceased  was left of out of government after he last served  as  Director of the Civil Cabinet of the Presidency of the republic.

The native  of  Zoetele in the South Region of Cameroon had become too influential and powerful within the Biya regime. His name alone sent shivers down the spines of certain regime lackeys. Eboutou was viewed as president Biya’s eyes and ears during his last years as director of the civil cabinet.

Dead at 79 years, Eboutou had a rich career within the Biya regime. His  removal  from government following the March 2, 2018 cabinet shakeup left many  surprised.

He rose from the position of Director of state protocol to become Chief of State protocol between 1989 and 1997. From September 19th to December   8th 1997, Eboutou served as Director of the Civil Cabinet of the Presidency. In 1998, he was moved to the United Nations as Cameroon’s permanent representative to the world diplomatic body.

On June 30, 2009, Belinga Eboutou was again appointed Director of Civil Cabinet of the presidency. He held that position again till March 2nd, 2018.

In 2010, he was made president of the organizing Committee of the Celebrations of the 50th anniversary of Cameroon’s Reunification.

He was  last seen  in public during the period  he  handed over power to  his successor Samuel Mvondo Ayolo as Director of Civil Cabinet  at the presidency.

Recently, a leaked document from the presidency dated April 20th , 2019 surfaced  wherein  Mvondo Ayolo instructed the Minister of Finance to take care of  Eboutou’s medical  bills in Switzerland. The funeral program is yet to be made public. It remains to be seen if   a state funeral will be staged in honour of this once revered element of  the current regime.