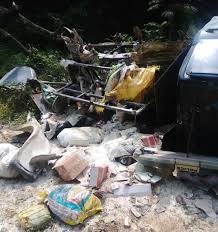 Mamfe (National Times)-The government of the republic of Cameroon has condemned a Saturday June 15 attack on a police van in Otu Village on the border with Nigeria in Manyu Division, South West Region which left 4 officers dead and six wounded  as criminal.

Communication Minister Rene Emmanuel Sadi  made clear government’s reading of the situation in a statement same day the attack happened. Besides the condemnation, the statement made public expedient measures at the instructions of president Biya which saw  the evacuation of the dead  and their wounded colleagues.

Sadi, said government is vexed that, ‘secessionists terrorists’ staged such an attack on security forces  at a time  president Biya has made bold his engagement for dialogue as the best option to arrest the crisis in the country’s two English speaking Regions.

At the moment, the wounded elements  are at the  Douala military hospital under close medical observation. The wounded comprise; Mballa Zambo, Moneye Ebanga, Monthe Eric, Owono Bokali and Ondja’a Jean. Meanwhile those who died are Tenga Gabriel, Kome Lewis, Djekai  Guy and Dibue Essoh. In the same statement, the government communicates the condolences of president Biya to the families of those killed in the attack.

Amid the loss, the president is confident the security officers will recover in the shortest time possible. Sadi restates the commitment of government to support the security of forces in their mission.

The government details that the security forces suffered an attack early Saturday as they headed for Otu village, Eyumojock sub Division from Mamfe. Government said, the separatists used improvised Explosive Devices (IED) to attack the police van which had on board 11 elements.

The National Times gleaned that; the police officers had been assigned on June 11 to take over from their peers who had come to the end of their mission. It is reported that, the uniform men were supposed to be airlifted to their new stations but last minute changes saw them hit the road early Saturday.

Saturday’s attack is one of the deadliest in recent times on the forces whom government has within the context of the crisis encouraged. The statement reiterates the conviction of the state to ensure a return to peace across the affected Regions.