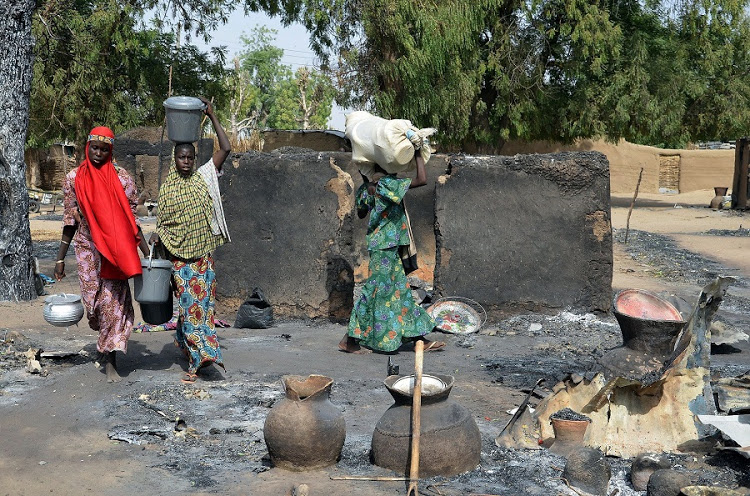 The suspected Boko Haram agents reports hold invaded the locality on board motorcycles and other vehicles. They killed locals among them women and children. Locals intimated that, some persons were even thrown in the blazing flames that razed homes.

A contingent of security forces under the aegis of the multinational joint task force   with mission to fight  the sect later stormed the locality. The military engagement is said to be what slowed the suspected terrorists.

Early Friday, some locals who suffered severe injury following the attack were reportedly rushed to the Mora District  hospital for medical attention.

Yet, they had set scores of homes on fire, food stuffs and other household items were reduced to ashes. Other families who survived the attack told reporters that, they escaped into the bushes under the cover of darkness.

In an interview granted the state media, the Governor of the Far North Region Midjiyawa Bakari appealed for calm from the population. Besides expressing sadness over the incident, the administrator urged the population to be on the alert especially as the Muslim feast of Ramadan is approaching. Midjiyawa   promised the locals of tightened security measures to ensure the security of persons and property.

The Tchkamari village raid comes less than 24 hours after another set of suspected members of the same sect murdered a warder  Amimou Banabase  in Mora on Wednesday. Aminou was serving at  the Mora Principal Prison. His killers reportedly trailed and murdered him.

Boko Haram’s activities in the Lake Chad basin triggered the creation of the multinational joint task force (MJTF) comprising at least 8700 soldiers to combat their incursions.  The, MJTF with contributions from mostly Nigeria , Chad, Benin and Cameroon  has weakened the terrorist sect  but  it is yet to surrender.