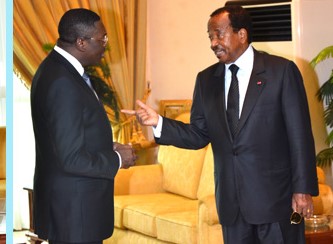 Has Biya Officially Made Ngoh Ngoh ‘President’ Of Cameroon?

Yaoundé (National Times)-Paul Biya has delegated his signature to the Secretary General at the Presidency, Ferdinand Ngoh Ngoh, for an unspecified period of time.

This information is contained in Le temps des réalisations.

According to the February/ March edition of the magazine, published by the Civil Cabinet of the Presidency, out of the 57 Presidential decrees signed in February 2019, decree no. 2019/043 of 5th February, 2019 “permanently delegating” signature to Ferdinand Ngoh Ngoh.

This means that henceforth, Ferdinand Ngoh Ngoh can take decisions on behalf of Paul Biya, as well as appoint people to top positions in the Republic.

However, the decree did not say whether the President is incapacitated or unavailable. It did not also specify the area of intervention, but leaves it open given the impression that the Secretary General has general territorial and functional competence.

Looking at article 10 (2) of the 1996 Constitution, “the President of the Republic may delegate some of his powers to the Prime Minister, other members of Government and any other senior administrative officials of the State, within the framework of their respective duties

The present decree falls short of saying whether Paul Biya has delegated some of his powers. Moreover, he did not consider delegating signature to the Prime Minister, who is constitutionally the Head of Government.

Speaking to retired senior personnel at the Presidency who craved for anonymity, our source said in time past, the competence of the Secretary General was limited to the Presidency and not nationally.

In recent times, Ferdinand Ngoh Ngoh has become very influential and sometimes considered the most powerful person in the Republic after Paul Biya.

Ngoh Ngoh has been very present in national life unlike his predecessors. Last year, he even signed a decree, in the place of the President, ordering and reappointing Divisional Officers who had abandoned their duty posts in the war-torn Anglophone Cameroon.

He has also intervened in many other situations of national life especially on very sensitive matters. For example, the project to host the African Cup of Nations (AFCON) is managed by Ngoh Ngoh and all reports done even by the Prime Minister’s Office have to be approved by the former before execution.

This explains why there was outcry; with many fingers pointing at Ngoh Ngoh after Cameroon lose the 2019 hosting rights because of corruption, uncompleted projects and insecurity.

With Ngoh Ngoh being the actual head of the AFCON project, even the committee set up to orgaanise the event is answerable to him.

In the end rather than sanctioning him, Biya instead reappointed him to the very powerful and influential position. Observers have now concluded that Biya is preparing Ngoh Ngoh to succeed him after other potential candidates like Mebe Ngo’o are behind bars. Others have argued that the present decree is just to give official status to a practice that has been going on for some time now.