Home » Politics » Three Entities To Protest For, Against Biya In Switzerland 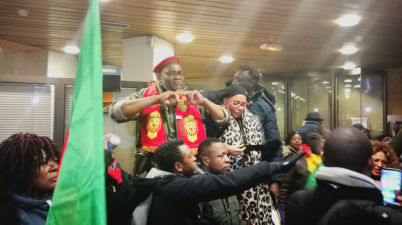 Three Entities To Protest For, Against Biya In Switzerland

Geneva (National Times)-Three different entities have declared their interests for a showdown at the Geneva Intercontinental Hotels tomorrow Saturday June 29 to either please or displease Cameroon’s Presidential couple, Paul and Chantal Biya. They are supposed to be having a quiet moment there.

The first of these movements to declare a public manifestation is the famous Brigade Anti-Sardinard (BAS). It is an anti-Biya movement. It declared its intention shortly after the President’s departure for Switzerland last Sunday. BAS said it would be organizing a crowd pulling event to make the hotel uncomfortable for Paul and Chantal Biya. They want they couple to return back to Cameroon.

BAS argues that the President cannot be resting in a world class hotel at the expense of the Cameroonian taxpayer meanwhile there is no peace back home. It holds Paul Biya principally responsible for the political impasse and ‘wars’ ongoing in Cameroon.

On hearing this, the Cameroon Ambassador to Geneva, Leonard Henri Bindzi quickly signed a communication on June 24 denouncing the acts of BAS, calling it unpatriotic. Even though far-away from Cameroon, the Ambassador has however promised harsh measures to any person disturbing the peace of the person who appointed him. He said anybody who disturbs the rest of Cameroon’s first diplomat would face the arm of the Swiss law.

While the BAS and the Cameroon Embassy are preparing to flex their muscles on Saturday, another group calling itself members of the ruling CPDM party based in Switzerland have published a communication calling on their members to come out massively on Saturday.

The CPDM’s venue is the same Intercontinental Hotels to chase those who want to perturb the sojourn of their National Chairman and President of the Republic.

According to the communication signed bythe President of CPDM Swiss, Dr Benjamin Sakem and Secretary, Angeline Henzen, the Swiss branch of the CPDM would not tolerate the “antipatriotic” actions of BAS. Even though not being custodians of Swiss law, the CPDM members went further to state that the “disorder” masterminded by BAS would not be accepted anymore on Swiss soil. “Disorder would not take place in Switzerland; the period of recreation is over because enough is enough! Henceforth, BAS would meet us on its way,” the communication read.

While the Cameroon Embassy in Switzerland is making its case based on Diplomatic privileges and principles, both BAS and CPDM in Swiss are claiming to have received authorization to hold public demonstrations on the same Saturday. Whatever be the case on Saturday, the President’s quiet, peaceful and private stay has become a noisy, disturbing and embarrassing episode  exposed to the entire world.