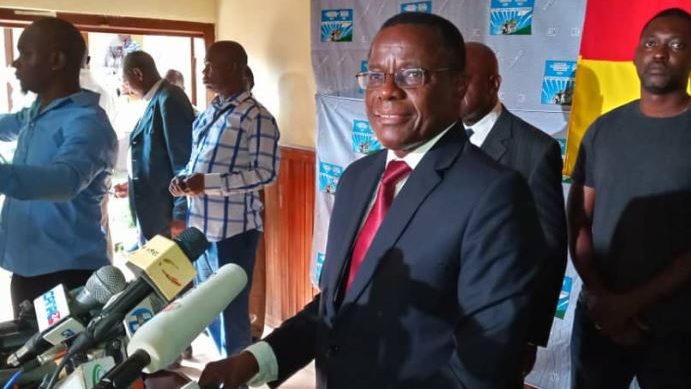 CRM Rejects Use Of Arms To Overthrow Biya Government

Washington DC (National Times)-The Cameroon Renaissance Movement (CRM) of detained Professor Maurice kamto has dissociated itself from what it say is a proposal from some compatriots  in the diaspora for the use of arms to overthrow the government of president Biya.

According to a statement issued by Charly Temkeng Communication Officer of the American branch of the CRM, the party  is not in support of the use of force against the regime in place. Temkeng  writes that on June 22, some Cameroonians  in the diaspora staged  a press conference Washington during which a proposal was made for the use of force against the current regime.

Temkeng  said some activists in the diaspora launched an appeal for an arms struggle  to effect a political change in Cameroon. The CRM official states in his statement that “ these remarks which are inappropriate  and contrary to the ideals of national  revival and peaceful  change advocated  by the CRM and its national president are only binding  on their authors “

The opposition party official however decries tension within the political space in Cameroon. He accuses the present regime of radicalizing the masses. Temkeng still considers the regime as illegitimate. He describes Kamto’s CRM party as being peaceful and republican in character and vision.

Kamto alongside some key party leaders and other militants are still in detention for staging protests which government did not authorise. Kamto was picked up on January 28 in Douala after leading protest on the 26th.

His vice Mamadou Mota was arrested on June 1st after he too maintained the string of planned protests. Calls for their release have been of no effect to the powers that be. State authorities have maintained that justice will take its course.

The CRM is contesting the elections of October 7th, 2018 which the Constitutional Council declared president Biya winner. The party is also demanding an end to the crisis in the English-speaking Regions. Kamto’s party also wants investigations into the 2019 AFCON hosting rights that were stripped from Cameroon.