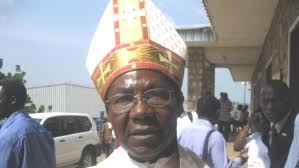 Renowned journalist Eli Smith confirmed news of the abduction in a tweet early Wednesday June 26th after rumours of such a happenstance first surfaced on Tuesday.

Smith tweeted that “Archbishop of Bamenda Archdiocese has been kidnapped by boys bearing hallmarks of armed groups generally referred to as Amba boys. Micheal Bibi  the auxiliary Bishop of Bamenda  has said. According to Bishop Bibi, the Arch Bishop Esua was kidnapped  along Belo-Njikwe road yesterday”.

It is the first  Bishop of Anglophone  extraction to have been kidnapped within the context of a crisis which the Bishops of Cameroon had long described  as a “useless war”.

The Bishops in the English-speaking Regions have been engaging in their pastoral missions in difficult circumstances  since the crisis went deadly. This is particularly true for Bishops George Nkuo of Kumbo Diocese, Andrew Nkea of Mamfe Diocese and Agapitus Nfon of Kumba Diocese”.

News of this development has sparked outrage across the Christian community in Cameroon. Many Christians  have condemned it stating that, the church authorities are neutral in the face of the crisis.

The church in Cameroon has been at the forefront of moves and calls for an end to the crisis inching towards a third year. Currently, the Anglophone General Conference (AGC) fronting to unite and shape Anglophone demands ahead of a potential national dialogue is the brain child of revered cleric Christian Cardinal Tumi.

Tumi who is Archbishop Emeritus of the Duoala Archdiocese has brought leaders of other Christian Missions and the imams of the Buea and Bamenda Central Mosque on board the AGC.

On July 2nd 2018 in prelude to his 75th birthday and 35th anniversary as a priest, Esua handed his resignation letter to Pope Francis. He told reporters then at the Bamenda Big Mankon Cathedral that “Take note that, according to the Cannon Law, when a Bishop reaches the age of 75, he tenders his resignation to the Pope so that the Pope should find some other person to take over from him, and I have done so already and I am waiting for the time when the Pope will appoint some other Bishop to take over from me,” he said.

As at the time  of publishing this piece, information which The National Times could not independently confirmed emerged of the clergy having been released from the unknown.