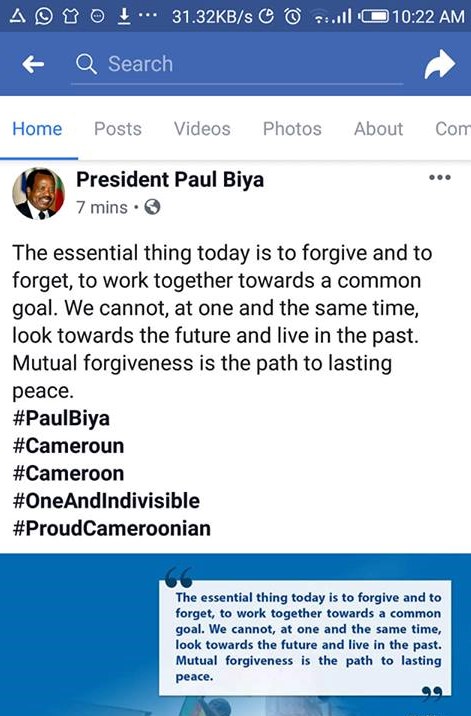 Yaoundé (National Times)-In his latest twitter, Cameroon’s President, Paul Biya, has begged Cameroonians to forgive him and join forces to work towards a common goal

“The essential thing today is to forgive and to forget, to work together towards a common goal,” Paul Biya said.

The embattled President took a theological angle like his namesake, the Biblical Saint Paul by preaching for unity and forgiveness for a better future. “We cannot, at one and the same time, look towards the future and live in the past. Mutual forgiveness is the path to lasting peace.

However, like the Biblical Saint Paul who presented himself to the people as a repented and transformed person, who no longer persecutes, PBiya’s message did not specifically state whether he is willing to make some redemptive moves to solve Cameroon’s numerous malaises like freeing Kamto and his supporters, freeing all detained in connection with the Anglophone question and compensating families as well as call for negotiation with the different parties.

Like the Biblical Saint Paul who abdicated from his privileged position and met with the people and not just writing epistles, Biya’s message did not also say when he will make a public address, speaking to the hearts of the people and when he will visit them to ask for forgiveness.

The message which is left open does not say whether he has forgiven those who have trespassed against him.

Many are already reacting with some saying Paul Biya is always late like Consul Hewett. “When we needed this it did not come,” a concerned Cameroonian said. Another twitter writer congratulated the President for the message, but said it must be done in justice and truth.

Another respondent said it is only after the independence of Southern Cameroons that they can talk of forgiveness. Others have, however, praised the President saying looking at the present condition, Cameroonians need to forgive to keep the country stable again.

In recent time, the President has taken to twitter preaching messages of peace and national unity to the extent that some now call him the “tweetologist.”