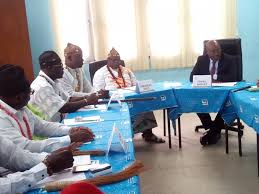 Yesterday’s outing has generated anger across the board. Some Cameroonians are questioning the rationale  of the royal fathers of rushing to SONARA whereas  the Cameroon Development Corporation (CDC) has been in distress owing to Anglophone crisis yet has never receive such sympathy.

The CDC with headquarters in Limbe, Fako Division is Cameroon’s second highest employer after the government. The corporation has a work force of over 22000. At least 12000 employees would have clocked a year without salaries by July 2019.

SONARA on its part is known to have a little over 700 staffs. Its accident happened just thirteen day back. Government has taken measures already assuring staffs of their salaries. The state has maintained that, there will be no job cuts.

There are those who have saluted the custodians of tradition for taking such a step giving the controversy surrounding the cause of the SONARA fire disaster. Yet critics hold that, such visits have been hastened given the financial strength of SONARA. They accuse the chiefs of putting pecuniary interest above the plight of their people.