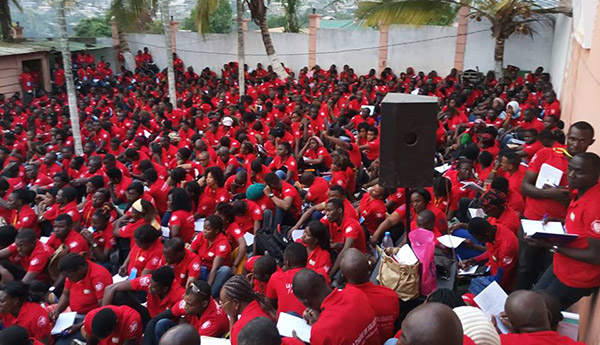 Yaounde (National Times)-Some subscribers of a  controversial  organisation; Mission for Integration and Development of Africa popularly known by its French acronym (MIDA),  surfaced at the Yaoundé Military stadium Wednesday May 8th grumbling over the absence of their names and discrepancies in amounts allocated for others as reimbursements went underway.

The Governor of Cameroon’s Center Region Paul Naseri Bea launched the operation at the Military Stadium. Some of the victims of the scam told The National Times they were not happy with the turn of events.

The disgruntled persons comprise of those who differ with the amount of money attributed to their names while others are vexed that, their names did not feature on the lists published.

Mr Ateba Owona Jean-Paul, whose name did not feature on the list, explained : “The governor has decided to pay 31% of the money invested by each subscriber during the the seventh and eighth rounds. But what we decry is the discrimination in the scheme whereby he has sidelined some persons.

“He has not told the media the truth, how he is going about the compensation. But we have discovered that he is proceeding as follows:  If a subscriber, for instance , invested FCFA 1M during the sixth round and received FCFA 5.2M, and during the seventh round the same subscriber invested FCFA 15M, Mr Naseri Paul Bea will first deduct the 4.2M of profit that you made during the previous round from the 15M before giving you 31% of the remaining money. And if the profit you got during the previous round exceeded your final investment, Naseri Paul Bea will exclude your name from the list.

Ateba continued that “even so, we were expecting an increase in the 31% given that some people have been sidelined. But Mr Naseri Paul Bea is keeping  the over four billion seized from leaders of MIDA and from other sources. Whereas the head of state by disbursing an additional one billion is trying to maintain peace and avoid chaos.”

Mr Ateba, who would have collected over FCFA 400,000, has revealed that he will lead fellow subscribers to protest against the so-called discrimination.

But some people who fall in this category have been spared thanks to some technical issues. They include those who changed representatives during the seventh round.

Some people have condemned the complaints, arguing that the government was not obliged to compensate the victims.

The lists  pasted on the wall of the stadium features names starting with letters A and B only. Subsequent lists will come up in the days ahead. Payment is expected to span several days as thousands of subscribers appear before the five counters erected for the purpose.

Government disbursed FCFA one billion in April to add to the money seized from the leaders of MIDA to help calm  the frustration.

How did the MIDA scheme operates

Subscribers say the minimum investment was FCFA 12,500, which would yield FCFA 65,000. A subscriber could come as an individual or an association. Coming as an association meant you had a minimum of two investment packages. Some people went round collected money from others to invest under their own names, acting thus as their representatives.

Some people invested over ten million francs, hoping to receive about three times the amount.

The scheme survived six rounds but the next two ended half way in 2018 when MIDA was banned and its leaders arrested. At least 6000 youths are victims of the scam. Fears of a social unrest pushed government to investigate the operators of the scheme when news of a scam broke out