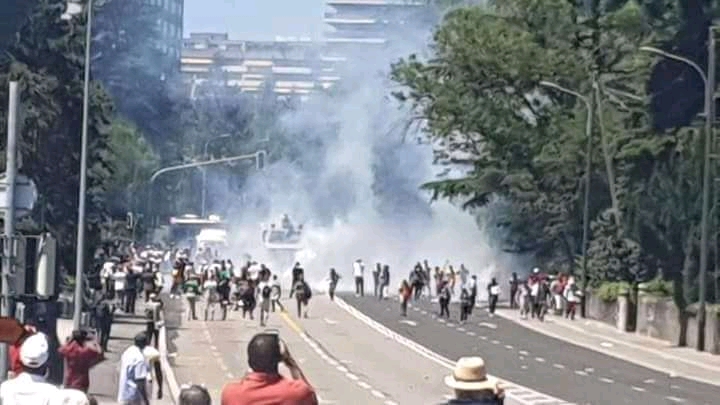 Geneva(National Times)-In recent times, the Swiss town of Geneva, home to some of the most important institutions in the world has also become a major battleground for the politicking in Cameroon as well as the war tearing the country apart.

During the last few days, Cameroonians of all works of live and all the corners of the earth have been more focused on Geneva than Yaoundé, the capital of Paul Biya’s country. Two main reasons have accounted for this; Biya’s presence in Geneva as well as the pre-dialogue between Biya’s government and Ambazonia separatists.

Chasing the Lion out of its Intercontinental Den

It is no secret that Cameroon’s ailing President and one of the last remaining dictators in the world has made the Geneva Intercontinental Hotels his third residence after the Etoudi palace and his palatial mansion in his village of M’vomeka, South Cameroon. Biya regularly spends months in the hotel and it is estimated that his huge entourage comprising of almost every essential staff in his life and that of his fashionable wife, Chantal Biya are among the about 50 persons dwelling with him at the hotel at every instance. It is estimated that Biya and his congregation spend a colossal $40,000USD daily at the hotel.

Unable to equate this paradisiac lifestyle with the malaises and hardships at home, members of the Cameroonian opposition mainly under the banner of the famous Brigade Anti-Sardinard-BAS have made it one of the main reasons of the existence of the movement the chasing away of Biya from the Intercontinental Hotels which has become the den of the Lion man of Cameroon.

Saturday, June 29 was the day and hundreds of Cameroonians carrying flags and messages like, “stop the genocide in the Anglophone regions” flung the “Place des Nations” street leading to the Intercontinental Hotels. Their main goal was to chase Biya out of the Hotels as they claim he cannot be enjoying in a world class abode while the people paying the bills are languishing in abject poverty.

The march started in the morning but protesters were prevented from reaching the hotel as most roads were blocked by the Geneva anti-riot police in full combat gear. Tear gas and water cannons were used to disperse the hundreds of persons who turned up for the event which also included supporters and sympathizers of Ambazonia as they carefully brandished its blue and white flag before the cameras.

Venting frustration far away from home

Among these BAS members and opposition staging anti-Biya protest in Geneva are mostly Cameroonians who left after falling out with the regime or on exile because of their political views. Some of them left because of the stagnating economy while others left because of limited opportunities. It is all these frustrations that they are venting on the man who has piloted the destiny of the country for the past 37 years. Majority of them are young people and have never known any other leader except Biya. In Cameroon where protest are ruthlessly suppressed with live weapons used on peaceful demonstrators, foreign lands like Geneva, which is the centre of the world have now become the new centre for the settling of the Cameroonian scores.

Apart from patronizing the business of the Intercontinental Hotels and boosting the Swiss economy, Paul Biya has also appointed the Swiss including the Swiss Centre for Humanitarian Dialogue to convince the various Ambazonia factions to settle the matter complicating the war in the North West and South West Cameroon.

With most leaders of the Ambazonia struggle agreeing to talk to the Biya regime via the Swiss as well as the Swiss Federal government assuring the impartiality of the process, Geneva has again become the place where Cameroonians settle their scores, thousands of kilometres away from the epicenter of the event.

Even though the intervention of the Geneva police cannot be compared to the brutality of the Cameroonian security and defense forces, it is however evident that violence was used to disperse the anti-Biya demonstrators on Saturday. This has brought enormous criticisms on the Swiss with many now considering the Swiss as a party backing the policies of Paul Biya and given him a safe haven for rest even when his people are dying every day in a war he could have aborted long time ago.

According to a letter addressed to the Swiss Ambassador to Cameroon by the Centre for Research on Rights and Obligations of the Person, the violent suppression of anti-Biya protesters is an indication that the Swiss government is a complicit to the ongoing crisis in Cameroon. The NGO which has consultative status with the United Nations Economic and Social Council argued, in the letter that because of this action, the Swiss cannot be an impartial mediator in the Anglophone question.

Switzerland in the Cameroonian dilemma

Switzerland has the reputation of being one of the most peaceful countries in the world, which is why it hosts a good number of United Nations agencies and other international organizations. It has also become a peace haven for world leaders who seek quiet time. However, that of Biya has become very noisy and complicating diplomatic issues as well as the reputation of the host country.

Switzerland is now found in the dilemma of protecting a seating Head of State of a friendly nation, Cameroon, upholding its long standing reputation and presenting itself as an impartial mediator in the Anglophone question. At first instance, many had criticized the Swiss for being partial because it is Biya’s affectionate home and the latest events would further cast doubts on the country’s ability to stay neutral in the upcoming negotiations. This may explain why many other Ambazonia groups including the very active Ambazonia Governing Council of Dr Lucas Ayaba Cho, parent of the Ambazonia Defence Forces decided to boycott talks.