Yaounde(National Times)-An April 18 , 2019 statement of the European Union (EU) parliament  on the escalating Anglophone crisis in Cameroon’s North West and South West Regions  has moved the country’s senate to issue a release challenging the view of Europe on the situation.

The reaction has shocked observers of developments in Cameroon since the crisis sparked off in November 2016. The Senate has never held a debate  on the issue except for passive declarations in speeches.

Pressure from the Social Democratic Front (SDF) opposition senators for the crisis to be discussed in session have fallen on deaf ears. Almost 29 months  down  in the crisis, Cameroon’s senate  is sending out a strong statement only after the EU parliament’s  stand which seem to be contrary to the view of the ruling class.

Apart from members of the national assembly from both the ruling party and the opposition who dared to visit the turbulent regions  in the early days of the crisis, the senate  has never dispatched even a commission to get independent findings.

Yet in its Friday April 19th statement, the senate president  Marcel Niat Njifenji writes stating the willingness of his institution to host a delegation of EU parliamentarians  for an understanding of the situation.

“ The Senate of the republic of Cameroon which stands proud of its good cooperation ties with the European Parliament, and overall, that  of the state of Cameroon with all  the institutions of the European Union shall be delighted  to host a delegation of European MPS in its country, so the latter make their own opinion on the socio-political  and security situation of Cameroon”. Niat wrote.

The second in command on state protocol  writes that, the Senate is convinced with measures the executive has taken to  “curb the violence  perpetrated by Boko Haram terrorist  sect in the Far North Region and to ease the situation in the North West and South West Regions, for the populations which are victims of these terrorist attacks  to get the fulfillment of peace  which is their legitimate right”.

Niat  states that, President Biya has since  assuming the office of the supreme magistracy  put in place a system that guarantees  “access to the free expression of individual and collective freedoms”. He reminds the European law makers to understand the situation given that, the continent has of recent equally been facing ‘separatists’ threats and/ or terrorist violence which affects the daily lives of their population”.

According to the senate president, Cameroon is tied to its “territorial integrity and its unitary decentralised  status”. He says the government has been open to dialogue and has always listened to the complaints of all social classes.

Besides, the senate president documents that, the upper house of parliament “condemns the statements found in this resolution which outlines a litany  of falsehoods on the socio-political  and security situation in Cameron”. 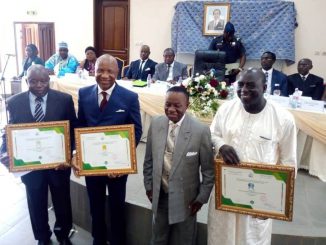