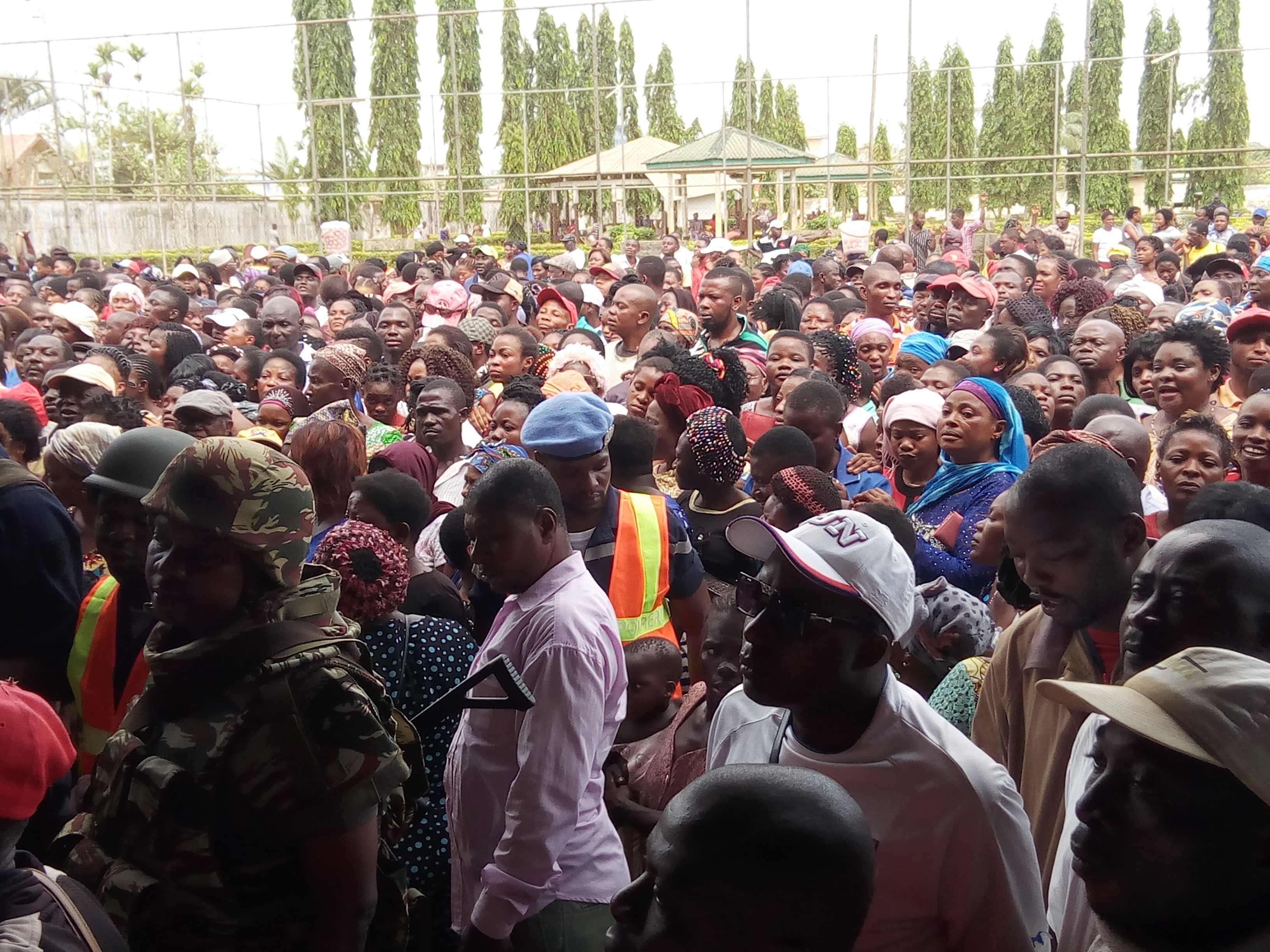 Kumba (National Times)-At least 2500 persons  showed up at the Amusement Park in Kumba, Meme Division, South West Region of Cameroon Tuesday May 7 scrambling  to benefit from humanitarian aid directed to victims of the Anglophone crisis.

According to the Senior Divisional Officer (SDO) for  Meme, Chamberlin Ntou’ou Ndong, president Biya ordered for the distribution of the goods to internally Displaced persons (IDPs) of the  crisis plaguing the North West and South West Regions living in his area of competence.

The prefect said the aid was meant for 800 families. Yet the population that streamed to the distribution center outnumbered that target .

Divisional Officers (D Os)  of  four out  of the five sub Divisions that make up Meme were at the center of distributing the aid to the concerned. With the exception of the Divisional Officer of Mbonge who was not present, the exercise was herculean for the others.

The distribution dragged on till nightfall. People scrambled to make their way through to benefit from the aid. Items on distribution comprised mattresses, rice, blankets, vegetable oil among others.

It turned out to be a scene of chaos repeatedly as people scrambled to reach the point of distribution. Some of those who arrived the distribution point in the morning later called on their relatives. This triggered a massive turn out of the population.

Though the Divisional Officers  had a list of pre-registered receivers, most of those who showed up to collect the gift  had no idea of such formalities. Individuals who are not victims of the sociopolitical crisis were spotted equally scrambling to get hold of  the gifts donated.

Across the city, bikers crisscrossed neighbourhoods with items received from the distribution centers. Some  of those spotted with gifts were rumoured to have headed for the market to retail them to traders.

Quizzed on the recurrent issues of civil servants and other impersonators collecting the gifts while those actually displaced languished in misery, the SDO said the administrations was aware of the situation. He said investigations have been opened  and sanctions will be handed on culprits.

However, critics have blamed local administrators for giving room for such disorders. Such argue that,  the D Os should take the responsibility for any shortcomings since they are the ones registering displaced families.

Addressing the crowd, the prefect said, the Anglophone crisis is soon coming to an end. He told the population that, president Biya is aware of the sufferings of the masses reason why he sent them help.

Ntou’ou Ndong said, very soon, the crisis and its associated insecurity will be a thing of the past. He asked the beneficiaries to convince separatists’ fighters in the bushes to disarm and come back to the society. The prefect reiterated that,  none of those who decides to disarm will be arrested