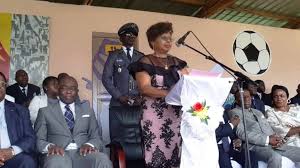 Yaounde (National Times)-A statement from Cameroon’s secondary education Minister Nalova Lyonga on  Thursday June 13th stating that  only two students missed  end of course examinations due to confusion over the date of the muslim feast of Ramadan has sparked outrage across the country.

Nalova Lyonga writes in her statement that, only two candidates missed the BEPC and CAP examinations due to the incident. She indicated that, the students  affected will have to wait for another academic  year to take the examinations.

Contrary to the statement issued  over a week after the incident, media reports had documented  dozens  of students who were denied access into the examination hall. Some of these had rushed to the examination centers beyond 30 minutes after extra time allowed for late candidates.

On the day of the incident, a chief of center in one of the centers in the Moungou Division told Douala-based Equinox television that 15 students were absent. In Douala and Foumban and other parts of the country, reports emerged of more students  who failed  to write the examinations  due to the confusion over the date.

Most students had missed out on examinations on Wednesday June 5th whereas students thought it was on Tuesday June 4. Many said information in this light had been shared on the social media. Other students claimed the same had been relayed in the media. Beyond this, there was confusion among two Muslim groupings over the date of the appearance of the moon.

After the incident, the opposition Social Democratic Front (SDF) party during its National Executive Meeting of June 9th declared that, 2000 candidates suffered from the confusion and missed out on the exams. The party resolved at that meeting urging the government to organise a special session of examinations for the affected students.

Since the minister’s statement surfaced on Thursday, there has been widespread condemnation across the board especially from militants of opposition political parties and educationists.