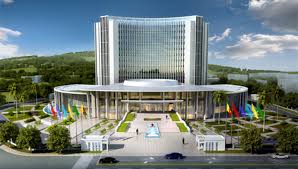 Yaounde(National Times)-China has granted FCFA 54.5 billion to Cameroon for the construction of a new building to house the nation’s national assembly.

The information was disclosed prior to an agreement reached on Thursday April 18 in Yaoundé by Cameroon’s Minister of the Economy, Planning and Regional Development(MINEPAT) Alamine Ousman Mey and the political manager and the Charge d’affaires at the Chinese embassy in Yaounde

The new edifice will cover a surface area of 57500 square meters, according to Minister Alamine Ousamane Mey. It will comprise a main block, a hemicycle and auxiliary structures.

Speaking after the encounter with the Chinese diplomat, Ousmane Mey said: “This is a grant coming from a friend, a long lasting friend, the supporter of Cameroon.”

Talking about the infrastructure, the minister pointed out that: “This is going to be a symbol of our corporation. It is going to change the look of our Yaounde city. This is going to give our parliamentarians the right, appropriate and comfortable environment for their work towards shaping the future of our nation, towards making our country an economy which is an emerging economy”

The Chinese diplomat on his part described the project as “a symbol of the friendship between Cameroon and China”, adding that the project will start as soon as possible.

But critics say China is very ‘cunning’ and is exploiting Cameroon’s natural resources at an alarming rate that the so-called grants can never compensate.

China also built a similar structure for the African Union in Addis Ababa and it was later on discovered that communication devices were implanted in the building  used to spy events at the AU headquarters.